The award was created to promote the best olive oil within a prestigious gastronomic context.

Three ad hoc dishes will be created using the best Light, Medium and Intense Fruity oils, based on the LODO Evaluation.

Claudio Sadler, Tommaso Arrigoni and Vincenzo Candiano used one of the best Fruttato Leggero, Medio or Intenso for their dishes for Lodo Guide 2023.

The oils selected for this award will be the samples entered in the QGP PRIZE.

“Milanese” by birth and spirit, born in 1956, Claudio Sadler began his career in catering once he finished his studies at the hotel institute by opening the “Locanda Vecchia Pavia” in Pavia.

Debut in Milan in 1986, when he opened the Osteria di Porta Cicca in Ripa di Porta Ticinese, where, in 1991, he was awarded his first Michelin Star. In 1995 the restaurant moved to via Troilo, also in the Navigli area, where it remained for 11 years and where it received the second Michelin Star (2002 – 2017).

In 1996 the Chef brought Italian culinary culture to Tokyo where a restaurant bearing the Sadler sign was opened, the experience was doubled in 2008 in Beijing where, in Tiananmen Square, he opened his restaurant assisted by two skilled collaborators. In 2007 Sadler moved to via Ascanio Sforza 77, not far from the previous restaurant, where he opened the starred restaurant which was soon joined by a second restaurant, Chic’n Quick – Trattoria Moderna.

On 7 December 2018 Chef Sadler was awarded the Ambrogino d’oro by the Municipality of Milan. 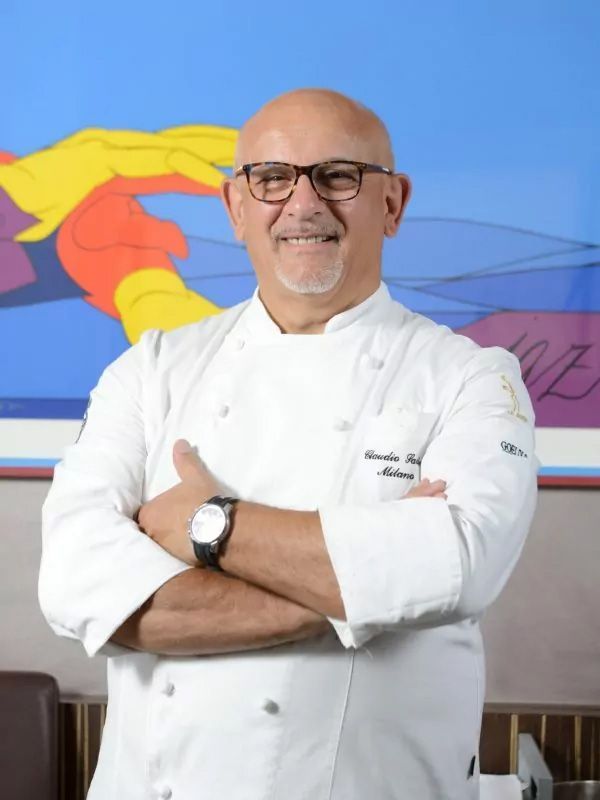 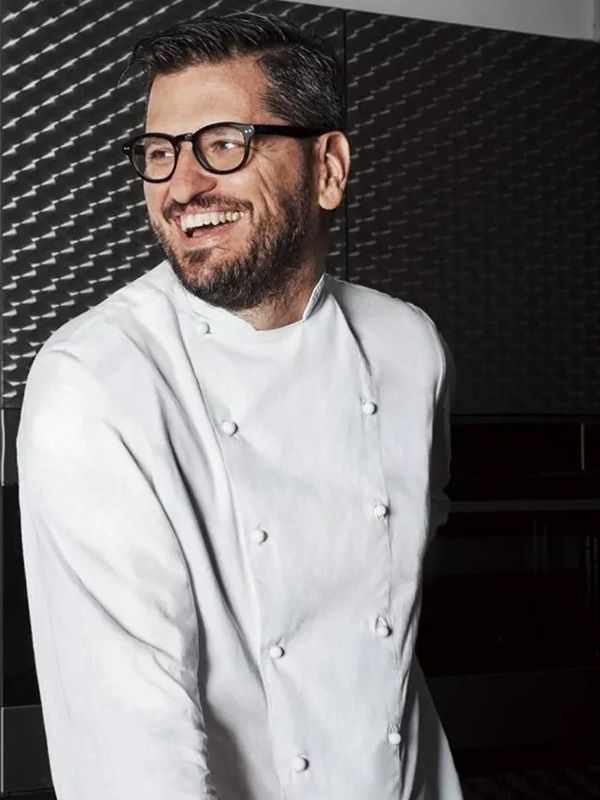 In 1995 he joined the Sadler brigade, a starry restaurant in Milan, where he honed himself perfecting techniques and rigour.

In 1998 he detected the Innocenti Evasioni restaurant in Milan, where he began a path to find taste, environment and high quality service.

In 2007 he became a member of the prestigious Jeunes Restaurateurs d’Europe until he served as Vice President.

In 2009 he was awarded the coveted Michelin star, which is still confirmed.

Since 2013 he has published his recipes in the magazine “La Cucina Italiana” (Condé Nast Group) and he is Chef resident of the TV show “Detto Fatto” on Rai Due and since 2019 he has been a fixed guest of the broadcast “La prova del Cuoco”, airing on Rai Uno.

He has held the role of testimonial and brand Ambassador for large Groups such as Consorzio Grana Padano, Whirlpool, Electrolux, Swisse (P&G Group), Gin Mare, Nespresso, Disneyland Paris, Jaguar, BOGGI Milano, Safilo. Since 2018 he has been Project Manager for special food events for EuroDisney Paris.
In 2016 he founded, together with his wife, “Arrilonga”, an estate in Monferrato (Piedmont) for the production and marketing of organic wine.
In 2017, in collaboration with the Designer Marco Goffi, he designed the table dish called “Galante” which was awarded in 2018 by the GOOD DESIGN ® Award in the Tabletop category.
In 2018 he founded “Innocenti Evasioni Gourmet Factory”, a space dedicated to the dissemination of food culture through cooking courses, team building, chefs tables and experimentation laboratories available to important brands of the world food.
In 2019 he published his first book “Uno chef senza sprechi” published by Guido Tommasi Editore

I was born in Scicli, a small town in the province of Ragusa forty-one years ago, but I grew up between Donnalucata, Modica and Ragusa. My father has a small farm, and I am the first of three brothers but not the only one with a passion for cooking. The family is my refuge where I prefer to devote my free time. To free my mind, I dedicate myself to my great passion, which is the world of motors.

The gastronomic guides I rely on are mainly my grandmothers and aunts, and it is no coincidence that the cuisine I love is simple and straightforward, with a taste of home.

For my guests, I like to be a bit of a storyteller, a bit of a sculptor and painter, but above all, an accomplice in making the Sicilian sensory experience come alive. Through my dishes, I tell the story of my homeland, my life yesterday and today, Sicilian social history and the influences my island has absorbed, evoking flavours and fragrances in a very personal and contemporary way.

My favourite ingredients are citrus fruits, tomatoes, herbs and spices; I love pastries and cannot resist the temptation to try new cheeses, both Italian and foreign. 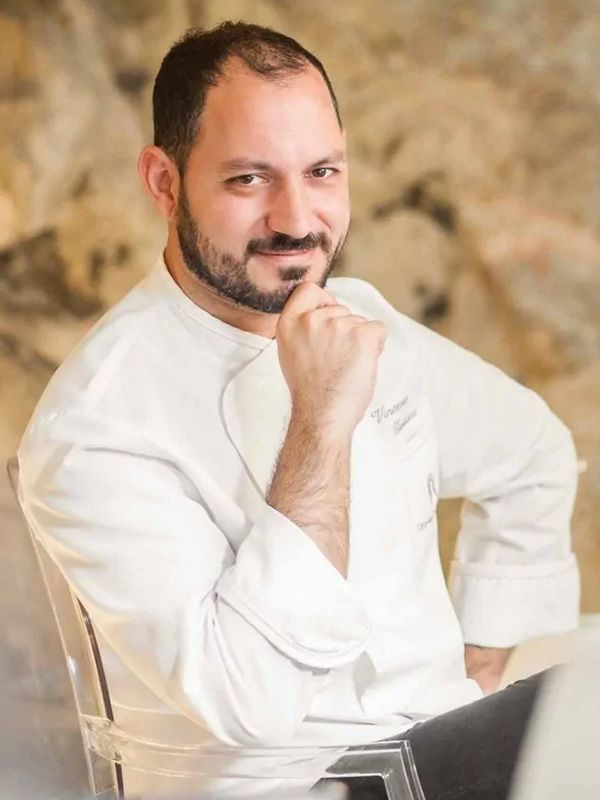 I have always worked with passion and have been humbled to make the most of every experience I have had, even in the simplest of structures.

I have been working for years in a sector where many of my colleagues have their own star-studded ranks both in Italy and abroad. I consider myself to be self-taught, with the awareness that each new dish on the menu is worth twice as much effort, but with the satisfaction that I am expressing a very personal style.

I follow avant-garde cuisine with great interest, but I can’t give up on less elaborate cuisine. However, if I had to start from scratch in a restaurant, I would do it from the pastry shop.

Since 2002, I have been managing the kitchen of the Locanda Don Serafino restaurant where, together with the owners Giuseppe and Antonio La Rosa, we immediately began the project of growth under the banner of quality. After years of constant effort, the first great results arrived. In 2007, I won the Young Emerging Chefs of Southern Italy competition, and I won the first Michelin Star while the second arrived in 2013.

With great pleasure, I am part of a restaurant and hotel of the Relais & Chateaux circuit, and of associations such as Le Soste and Le Soste di Ulisse where, when I can, I try to give my contribution by taking part in association events which, in addition to stimulating the exchange of ideas between chefs, have a positive influence on the promotion of the restaurant and of my territory.

Thanks to business trips abroad to places such as New York, Shanghai, Dubai, Malta, Beijing, Hong Kong, Abu Dhabi, Istanbul, Frankfurt, Bahrain, Bangkok and many other events around Italy, I take the opportunity to promote the ingredients I use every day and, therefore, Mediterranean cuisine.

In 2016, the Italian Academy of Historical Gastronomy and then in 2019, the Italian Federation of Chefs appointed me as Ambassador, as a promoter of gastronomic traditions and a tool for cultural, economic and tourist development, which together with the Diploma of the Vocational Course of “Culinary Medicine” obtained at the University of Catania in collaboration with the Departments of Agriculture, Food, Environment and Biomedical and Biotechnological Sciences, are awards and results of which I am proud because perhaps it reflects the noblest side of the work of a Chef.

Facebook-square Instagram Youtube Whatsapp
We and selected third parties use cookies or similar technologies for technical purposes and, with your consent, for other purposes as specified in the Cookie Policy. You can freely give, deny, or withdraw your consent at any time by clicking "Manage Consent" at the bottom of the page. You can consent to the use of such technologies by using the “Accept All” button or deny and close the notice by using the "Reject All" button. Settings

Reject all Accept all